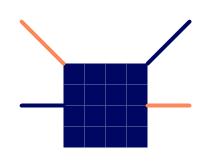 The left knot is made by knotting two threads together as follows.

Keep the left thread (orange) taut with your left hand and knot the right thread (the working thread, blue) around it with your right hand by putting it from right to left over the left (orange) thread.

Pull the knot tight. The first part of the double left knot is now finished.

In the patterns this double left knot is shown as follows.

We use cookies to ensure that we give you the best experience on our website. If you continue to use this site we will assume that you are happy with it.OkNoLees meer / Read more