Knotting: a little bag with a block design. The seventh and second to last video is published! 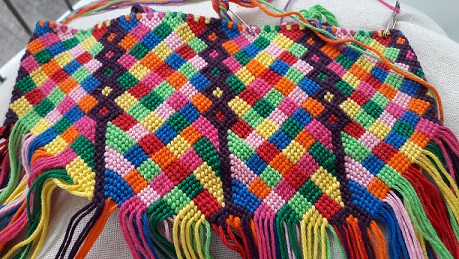 We almost reached the last video in this series. In this video I will show you how to knot the purple straight line. I had to change the design, because I noticed that the purple threads were used up a lot more quicker than the other colors. I could have figured that out in advance, because you make more knots with purple than with the other colors. But it turned out very nice. The design had some room left for having some variation, and this added just that little touch which made it more attractive. Okay, only one video to to go after this one, about finishing the little bag. And then this series will be finished. I already have a lot of ideas for the next series of video’s, and have been preparing for them, but, I will not give that away yet 🙂 . It will not be a knotting project, but something else that’s very nice and easy to do. But, first the last video of this series! See you then!

Last but not least, the video is spoken in Dutch, but has English subtitles!